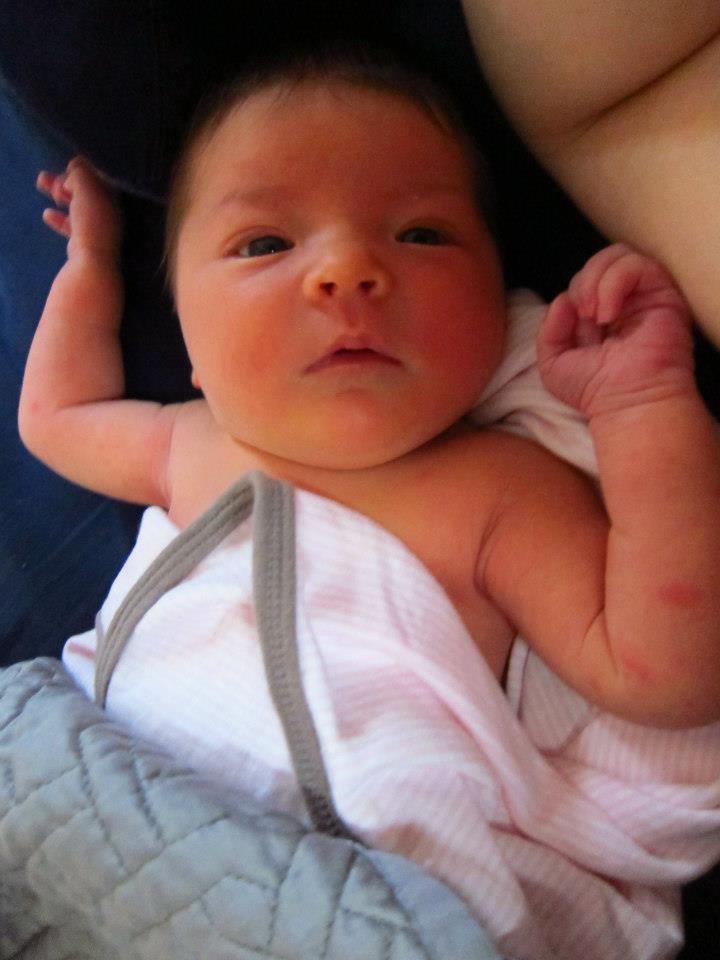 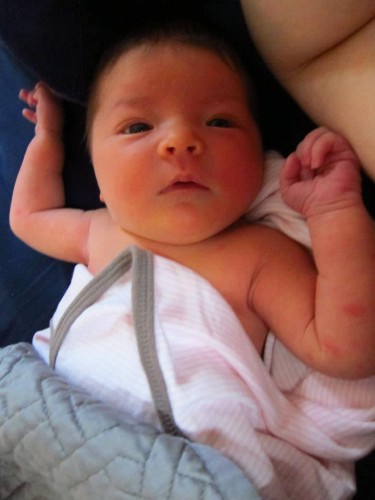 When I found out I was pregnant with my third baby I initially started seeing an OB. My first two pregnancies I did the same. I had always had the idea of a homebirth in the back of my mind, but being young and having a husband in the military I just did what was “normal”. I had them both in the hospital with an epidural each time. Even an unwanted episiotomy with my first. I remember being in labor with my daughter and specifically telling the doctor that I did not want one and having him tell me that they were standard, and cutting me right then and there. My second was better, we were blessed with a great nurse and an even better doctor. Still, I had an epidural and a typical hospital birth.

We decided on a homebirth for our third for a couple reasons. One, we were now separated from the military and our insurance would be running out half way through our pregnancy.  The cost difference is just crazy. So, we looked at our options. I suggested it to my husband after a discussion with the OB’s billing service. He started googling it right then and there while we waited…once again for our appointment to start. Which brings me to another reason. All my “scheduled” appointments were just the opposite. We waited almost an hour every time we had an appointment. Thirdly, they felt that I was a high risk pregnancy because, during my second pregnancy my son tried to come a little early and I was put on bedrest. I knew that the reason for it was because we had made a move overseas while I was pregnant. Since my husband had to go first without us. I had to travel many times by myself with an 18 month old and I just flat out over did it. So when the Dr at the OB office suggested a cervical cerclage I thought, “Nope! We are done here.” 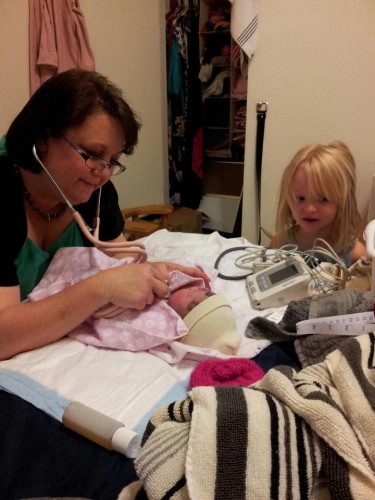 Darlene was the first midwife I had ever met. She came to our house and we all fell in love with her. I called the other midwives I had made appointments with and said, Sorry but I found my lady 🙂 She was so informative.  Every question we asked came with an honest answer.  Never just a yes or no but a real answer and most of the time if not all the time she had an example or a story to go along with it. I just loved her. Every appointment was either at our home or her office which was no more than 10 minutes away. We were never rushed. We never waited an hour to see her and she was always there with an answer to any question whether it was in person, email, or text.

On to the night of the birth 🙂

My husband and I had stayed up late that night watching a documentary on Johnny Carson. The one night I chose not to go to bed at a decent hour 🙂  Anyhoo, at around 2:30 a.m. I started to feel what kind of felt like contractions. I wasn’t totally sure since I had been having random contractions for a couple weeks. I tried to lay down to see if they would stop. Well, they didn’t. I texted Darlene at about 3 a.m. She asked if I thought this was it and I said it felt very similar to the beginning of my second birth. So she was on her way 🙂

I forgot to mention that near the end of my pregnancy we moved about 2 hours away. Darlene being the awesome woman she is made the commute for us. My contractions were already about 5-6 minutes apart. I did my best to stay calm and relaxed until she got there. At that point my labor ball was my best friend. I really really wanted to have a water birth so Darlene was bringing her birthing tub with.

Once she got to our house my contractions were pretty much right on top of each other. She came in and was like the take away the labor pain guru. She knew just where to push when a contraction came to almost eliminate the pain. Not long after she had me lay on my side, as a contraction came, she pushed down on those magical spots on my back and Boom! my water broke! For the first time I had felt my water break. What a feeling of relief!! I thought to myself, oh man that felt sooo good. Such relief. I was so excited to have felt that for the first time. It may sound silly but it really made me happy. Darlene goes, “Good, good job. Now it’s going to get a little more intense” I thought to myself, MORE intense?! lol We are already at intense. 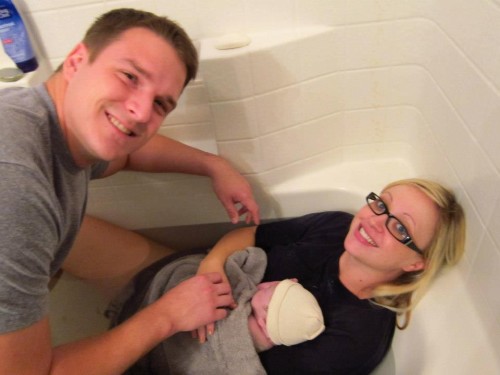 Since there was no time to set up the birthing tub Darlene had my husband clean and fill up our bathtub. I loved that bathtub! The warmth of the water seemed to melt away the pain, for a bit. Darlene was right, things got more intense. My contractions seemed to just turn into one big contraction. I did my best to breath through it. I did have a moment at the end when I looked at Darlene and said, “I think I need something”.  She said, “Well lets see where we are.” In that moment I thought to myself, “Okay! We can do this!” After that I decided it was time to push. Once I started pushing I almost felt as if I was not there. I remember the moment yet it was almost as if I was watching it happen. I don’t know if it’s because of the pain a.k.a the ring of fire 🙂 or if it’s because I just let go of any inhibitions. I was no longer quiet. I let it OUT!! and I think it really helped. I could feel my baby girl moving down. I could hear Darlene saying soothing words of encouragement while my husband was right there ready for our Anna to make her entrance. Her head was out! and Chris, my husband, checked to make sure the cord was not wrapped around her neck. She was good 🙂 So I bore down and pushed hard one last time. I felt her shoulders pass and then the rest of her body and she was here!! My husband caught her and I reached down and put her on my chest. She was perfect 🙂 The pain was gone and she was here. There was just a HUGE feeling of relief. I’ve never felt such a feeling of bliss. I did it!! Darlene gave us a towel and Anna and I laid in the bathtub for about 20 minutes. We didn’t cut the cord, or clean her off. We just layed together while my husband stroked her little head. She was perfect.After that my husband held the baby while Darlene helped me get cleaned up and into bed. I tore a tiny bit but nothing that required stitches. My body just healed itself.

My home birth experience compared to my two previous hospital births was night and day. I would never do it any other way. I loved that I was in my home and that my children were there. I got to get into my bed afterwards. I didn’t have to wait hours for the epidural to wear off before I could walk. No IV’s stuck in my arms. No stiff hospital gown or hospital lights. No being confined to laying in a bed on my back. I was sore but I was in my home that very night enjoying dinner with my family. It was one of the most amazing and empowering experiences of my life.