The bacteria that causes group B strep normally lives in the intestine, vagina, or rectal areas. Group B strep colonization is not a sexually transmitted disease (STD).  For most women there are no symptoms of carrying the GBS bacteria.  It naturally occurs.

How does someone get group B strep?

The bacteria that causes group B strep normally lives in the intestine, vagina, or rectal areas. Group B strep colonization is not a sexually transmitted disease (STD). Approximately 15-40% of all healthy women carry group B strep bacteria. For most women there are no symptoms of carrying the GBS bacteria.

What if I test positive for Group B Strep infection?

If you test positive for GBS this simply means that you are a carrier. Not every baby who is born to a mother who tests positive for GBS will become ill. Approximately one of every 100 to 200 babies whose mothers carry GBS will develop signs and symptoms of GBS disease. There are, however, symptoms that may indicate that you are at a higher risk of delivering a baby with GBS. These symptoms include:

What can I do?

The Centers for Disease Control and Prevention (CDC) has recommended routine screening for vaginal strep B for all pregnant women. This screening is performed between the 35th and 37th week of pregnancy. Anytime other than this time will not be significant to show if a woman is carrying GBS during the time of her delivery.

The test involves a swab of both the vagina and the rectum. The sample is then taken to a lab where a culture is analyzed for any presence of GBS. Test results are usually available within 24 to 48 hours.

If your GBS/vaginal cultures are complete and you are positive for GBS, this does not mean you have an infection, just that you are 1 of 10-30% of women who are positive for finding the bacteria in their system while pregnant.  The lowest growth you can have is, ‘Light Growth Isolated.’  You can be ‘Isolated’, ‘Moderate’ or ‘Heavy’ in growth.

We have been following studies and research showing great success in using Hibiclens, as well as our clients.  Women who tested positive with a heavy growth reduce their growth to isolated.  And most our expecting mothers are negative when they go into labor.  Data supports its effectiveness equal to the IV protocol in use in the USA, but it is totally ignored due to the widespread use of IV in labor in the US.”

We would like you to purchase Hibiclens (found at most drugstores) antimicrobial and antiseptic cleanser and use it help keep GBS isolated or get rid of it completely.

*WE ARE FULLY AWARE THAT THE LABEL SAYS NOT TO PUT ON GENITALS.  WE ARE HAVING YOU DILUTE IT TO AN AMOUNT THAT IS SAFE AND PREVENTATIVE.*

Prepare 0.5 oz of Hibiclens in 7.5 – 8 ozs of warm water in a peri-bottle or something similar.

You will do this every day until delivery!  We will do the culture again after you’ve been doing the wash for a couple weeks. 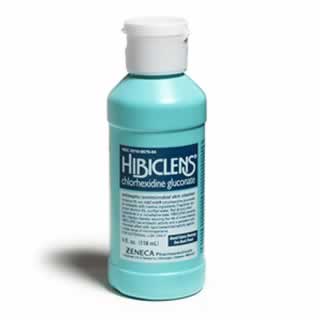 The current standard of care involves determining a woman’s GBS status, while this is not a legal requirement it is offered to every expecting mother. If a women’s GBS status is not determined, treatment with IV antibiotics is strongly recommended if there is:

·         Previous delivery of a newborn with GBS or evidence of GBS urinary infection.

·         Women who carry GBS but do not develop a fever during labor > 38 C or 100.4 F, have ruptured membranes over 18 hours or have labor or ruptured membranes before 37 weeks, have a relatively low risk of delivering an infant with GBS disease.

·         With antibiotic therapy a mild allergic reaction to penicillin occurs in 1 out 10 women.

·         There is a 1 in 10,000 chance of developing a severe allergic reaction (anaphylaxis). This is a life-threatening condition which requires emergency treatment.

·         Preterm infants and infants weighing less than 2500g have a much higher infection rate.

·         Babies that survive a serious infection with GBS, particularly those who have meningitis, may have long-term problems, such as hearing or vision loss or learning disabilities. Approximately 15-20% of GBS infected babies will not survive.

Signs of GBS infection in the Newborn

GBS is usually present as blood poisoning, pneumonia, or meningitis. Signs of GBS infection usually become apparent within the first two days of life, but may occur within hours of birth. Signs of an infection in a newborn can be difficult to determine. They include lethargy, poor feeding, high/low temperatures, irritability, high/low breathing rates, and breathing difficulties as seen by flaring of the nostril, labored breathing, grunting noises, and/or a blue appearance.

ampicillin in the prevention of vertical transmission of neonatal group B streptococcus, at term. Facchinetti F,

OBJECTIVE: To investigate the efficacy of intrapartum vaginal flushings with chlorhexidine compared with

ampicillin in preventing group B streptococcus transmission to neonates. METHODS: This was a randomized

must not have occurred more than 6 h previously. Women with any gestational complication, with a newborn

excluded. A total of 244 group B streptococcus-colonized mothers at term (screened at 36-38 weeks) were

randomized to receive either 140 ml chlorhexidine 0.2% by vaginal flushings every 6 h or ampicillin 2 g

RESULTS: A total of 108 women were treated with ampicillin and 109 with chlorhexidine. Their ages and

gestational weeks at delivery were similar in the two groups. Nulliparous women were equally distributed

between the two groups (ampicillin, 87%; chlorhexidine, 89%). Clinical data such as birth weight (ampicillin,

was the rate of neonatal group B streptococcus colonization (chlorhexidine, 15.6%; ampicillin, 12%).

Escherichia coli, on the other hand, was significantly more prevalent in the ampicillin (7.4%) than in the

including two cases of early-onset sepsis (one in each group).

streptococcus. Moreover, the rate of neonatal E. coli colonization was reduced by chlorhexidine.

University, Baltimore MD 21205, USA. OBJECTIVE: To determine if cleansing the birth canal with an

total of 6965 women giving birth in a six month period and their 7160 babies. INTERVENTION: Manual wipe

of the maternal birth canal with a 0.25% chlorhexidine solution at every vaginal examination before delivery.

Babies born during the intervention were also wiped with chlorhexidine. MAIN OUTCOME MEASURES:

Effects of the intervention on neonatal and maternal morbidity and mortality. RESULTS: 3635 women giving

were enrolled in the non-intervention phase. There were no adverse reactions related to the intervention

among the mothers or their children. Among infants born in the intervention phase, overall neonatal

mothers receiving the intervention, admissions related to delivery were reduced (29.4 v 40.2 per 1000

0.02) and duration of hospitalization (Wilcoxon P =0.008). CONCLUSIONS: Cleansing the birth canal with

and Obstetrics, Aker Hospital, University of Oslo, Norway. The purpose of this study was to determine

transmission of vaginal microorganisms including Streptococcus agalactiae (streptococcus serogroup B =

GBS) and hence infectious morbidity in both mother and child. A prospective controlled study was conducted

on pairs of mothers and their offspring. During the first 4 months (reference phase),the vaginal flora of

women in labor was recorded and the newborns monitored. During the next 5 months (intervention phase), a

trial of randomized, blinded placebo controlled douching with either 0.2% chlorhexidine or sterile saline was

performed on 1130 women in vaginal labor. During childbirth, bacteria were isolated from 78% of the women.

Vertical transmission of microbes occurred in 43% of the reference deliveries. In the double blind study,

infections (P< 0.0 1). In the early postpartum period, fever in the mothers was significantly lower in the

patients offered vaginal disinfection, a reduction from 7.2% in those douched using saline compared with

occurrence of urinary tract infections was also observed, 6.2% in the saline group as compared with 3.4% in

demonstrated that vaginal douching with 0.2% chlorhexidine during labor can significantly reduce both

tolerated. The beneficial effect may be ascribed both to mechanical cleansing by liquid flow and to the

vagina during birth is an important cause of invasive neonatal infection. We have done a prospective,

neonatal disease due to vaginal transmission of S. agalactiae. On arrival in the delivery room, swabs were

taken for culture from the vaginas of 4483 women who were expecting a full- term single birth. Vaginal

(2245) and this procedure was repeated every 6 h until delivery. The rate of admission of babies to specialcare

neonatal units within 48 h of delivery was the primary end point. For babies born to placebo- treated

women, maternal carriage of S. agalactiae was associated with a significant increase in the rate of admission

is associated with excess early neonatal morbidity, apparently related to aspiration of the organism, that can

be reduced with chlorhexidine disinfection of the vagina during labor.

Netherlands. In a prospective study in 227 parturients, carriership of group B streptococci was established to

be 25%. In carriers, transmission of streptococci to the newborn occurred in 50%. 10 ml of a chlorhexidine gel

containing hydroxypropylmethylcellulose was introduced into the vagina during labor in 17 parturients, who

were known to be carriers of group B streptococci from the first trimester of pregnancy. In none of the

newborns from these mothers colonization by group B streptococci did occur. Vaginal application of

chlorhexidine may prevent transmission of group B streptococci, and serve as an alternative to intrapartum

with group B streptococci. III. Effect of vaginal washing with chlorhexidine before rupture of the membranes.

Taken together, 2 of 57 (4%) cultures obtained at birth were positive in the

neonatal period with GBS but also with other chlorhexidine-sensitive organisms.