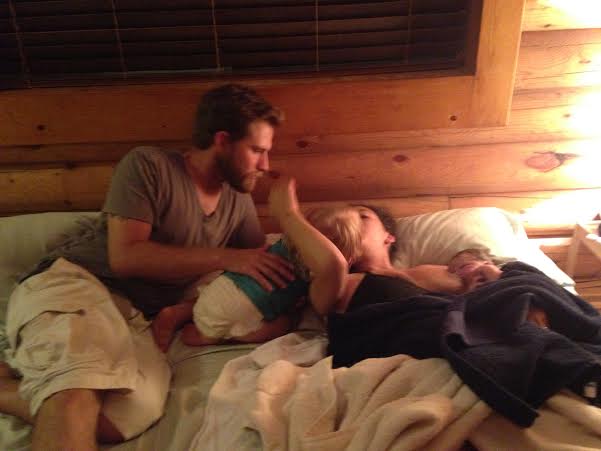 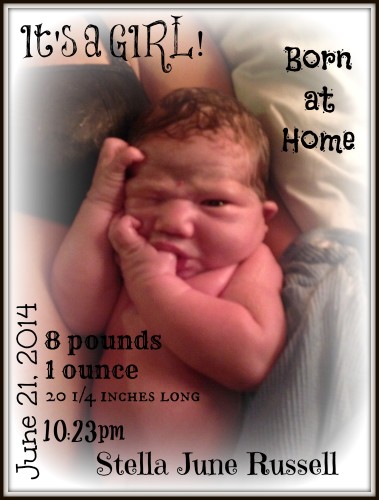 Although Stella was my second natural/no med birth I did not know what to expect. Things this time around were much different and this was my first homebirth. I began having intense contractions two weeks before I had her. I would think I was going into labor over and over again, but my body was just preparing. Darlene was very patient and calm with my uncertainty, which calmed me. Those days leading up to labor seem so blissful in my memories.

The morning of the day I had her I really wanted to check her heartbeat with the doppler. It seemed she was moving less. Even though I had been in to check on things at Darlene’s office only a couple of days before, at my prenatal exam, Darlene was happy to meet with me to check Stella’s heart rate. She checked us over and everything was good. She also checked to see if I was dilated (by my request) and I was at about a 4. I went about my day as usual.

As the day progressed my contractions continued. They were mild and not yet uncomfortable. They began to get closer and closer together. At around 4:30pm I began to have bloody show. I had an overall feeling of intensity. I was at my mom’s house which is 5 minutes away from where I live. I wanted to go home. We headed home and I contacted Darlene to tell her it was time. I felt certain it was. I took a shower and put on some comfortable clothes. I felt excited and nervous, but in a good way. I was ready to endure labor and meet Stella.

Darlene and Gina arrived shortly. It was almost surreal that the time had come to have my baby and that they were there to deliver her. We talked a little bit and Darlene checked me. I believe I was at a five or six. I put some clary sage essential oil behind my ankles to encourage contractions and went for a walk. I made it one street over and decided I better start heading back quickly. The contractions really started coming on strong. With several stops (because I was unable to walk through the contractions) on the way back, I finally made it home. I was also diffusing clary sage essential oil at the time. So while we were all sort of just hanging out and visiting I went and smelled the diffuser and started having back to back contractions. It got intense for me. I went and sat on my birthing ball.

Things began to get blurry after that. I remember Gina asking me a question and I was unable to focus enough to answer.The only way I know how to describe it is that I was very soul-focused. There was no physical me, I was completely just my soul living in the exact moment experiencing intensity at it’s finest. I used a technique from the book Birthing From Within to try and cope with the painful contractions where I focused on: what I was hearing, what I was seeing, and what I was smelling. It was perfect for that moment. 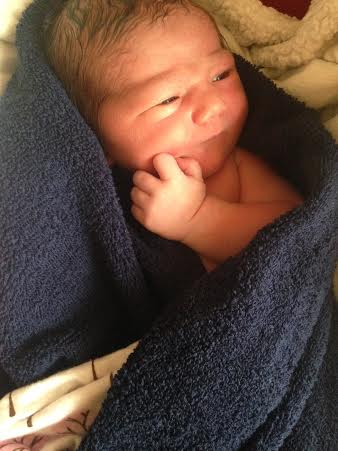 Darlene and Gina had set everything up in my living room because that is where I had planned to deliver Stella, but as the time came closer I wanted to birth in my tiny bedroom. I remember going in the bathroom and putting on everything I had planned to birth in. I knew Stella would arrive shortly and regular clothes were just confining. In those moments nothing was a conscious choice, everything just “was”. I put helichrysum and frankincense essential oil on my neck, belly, and heart. I felt safe and taken care of by Darlene and by mother nature. At this point with every contraction someone was applying counter-pressure to my lower back. It helped tremendously.

I moved to the birthing stool at the foot of the bed. I started getting nauseous and feeling like I was ready to push. Darlene checked me and I wasn’t quite dilated all the way yet. I made it through a few more contractions and just felt so ready. I had her check me again, but I still wasn’t dilated completely. I couldn’t stop the urge to push- Darlene trusted me and my body so she assisted Stella a bit. Pushing brought me the most wonderful relief from contractions. I truly felt that Stella and I were both working together on this. Justin held my hand. This part of my labor was beautifully in-explainable. 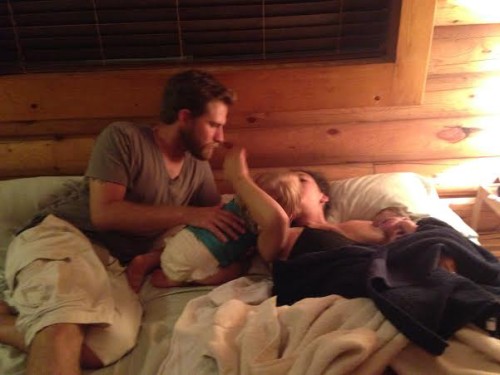 The ring of fire began as Stella’s head emerged. I tried with all that I had to push slowly. I remember saying “I want her out! I want her out!” Everyone reassured me that she was almost out. The rest of her body came out as Darlene caught her. She handed Stella right to me and that was the best moment in my life. There was such a rush of raw, pure, joy as I held my slippery warm baby against my heart. The baby that I carried for nine months was in my arms at last. She was calm, just as her birth was. The moment was immense. She was able to latch on and begin nursing right away, before the cord was even cut.

I began to bleed a little too heavy which was sort of hard to process at the time. Darlene knew exactly what to do and was able to get it under control very quickly, so I could stay focused on my baby. I moved to the bed to lay down and delivered the placenta. About thirty minutes later my 2 yr old son, Nolan, came in to meet Stella for the first time. And then there were four of us.